There are several different types of Maeng Da Kratom based on their origin and color.

The first type is the Maenga Da Kratom from Thailand and its native islands. The wild Thai is one of the most costly Kratom species that can find online. This is because it is very rare, so it is hard to find. The Thai leaves have been proven to be the best, and they are a lot more used than the Kratom leaves that are farmed. These leaves are usually grafted into another plant, and then it is grown into a tree that becomes an adult.

The second type is the Maeng Da that is from Indonesia. It is known to act a lot quicker than the normal Maeng Da. This is because it is a cross between the Super Green Malay and white Sumatra. It is synthetic so it is always going to be found in the best quality and will be great to boost a person’s mood. It is best known for its unique taste. It also can show the right combination for relaxing and stimulation effects when a person takes it regularly.

The third type is the Maeng Da that is from Malaysia. It is an ambient light green color and is known to be synthetic It does not have anything extraordinary but it does taste a little bit sour compared to the other types of Maeng Da. It does have a few side effects, but it works very slow and steady, so a lot of people are not going to notice the side effects. Most of the users will see that can calm their muscles and their brain. But because of this, people might notice an itch that can become annoying to them at times. This is one of the reasons that it is also known as the mixed Maeng Da or the white horned Maeng Da. 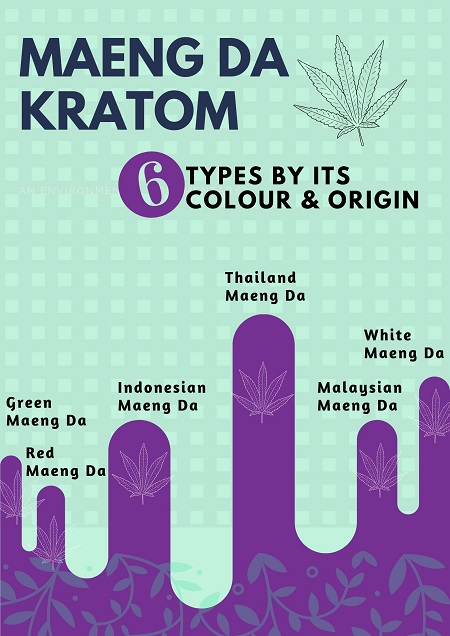 The fourth type is the Green Maeng Da Kratom. This means that the vein that is present in the leaf is green. This is not one of the fastest strains that a person can take because it is only going to give a slight nervous or hyperactive feeling. It acts like a spell or a magic charm because it can give your personality a touch of charm. Therefore, you are going to become a person that everyone is going to want to hang around. But you are going to need to be careful when you are taking it because you are going to be active. You might not know how to handle yourself when you become that active.

The fifth type is the red maeng da. The leaves of this strain are going to be red. This strain that is going to pack the biggest punch. It is also going to work a lot faster than any of the other strains. It is powerful and will last for an extended period. Then when a person thinks that the effects are going away, it is going to hit you all over again. It means that your mind is going to open up to allow you to learn a variety of different information. Therefore, your mind is going to be clear and sharp. A lot of people are going to use the red maeng da as a pain reliever for people who have chronic pain.

This strain is known to give a big boost of motivation along with helping people who might suffer from depression. This means that you might lay awake in your bed for hours at a time. This Kratom has a lot number of alkaloids in it, so that is why it has the stimulating effects. People need to be aware that there is a chance that when they take the red maeng da that it could feel like a panic attack. Therefore, people who tend panic, do not need to take it.

The sixth type is the white maeng da. The leaves of this plant are going to be white just like the name entitles. That is great for a person who likes to work hard and play even harder. This is for the person who wants to try something new. A lot of people will use it as an alternative to alcohol because they don’t have to worry about their liver damaged while they are taking it. When you are talking this Kratom, you are probably going to talk a lot, so this means that you are going to be a lot more social. It can also help to relieve some of the pain that a person might be in. That is great because it can be an excellent alternative to any of the prescription drugs that the doctor could recommend for your pain.

This strain is known as the working men’s strain by all of the people who live in Thailand. This is because it is going to help a man to focus on the work that needs to done since it has a lot of stimulating and focusing effects that are very strong. Therefore, a person is going to be able to work a 12-hour shift and still be a good mood when they leave work. It can also have some effects that can be very irritating. Therefore, if this happens, you are going to need to limit your dosage. The best way to do this is through a complete dosing schedule.

These are the top six types of maeng da based on where they originated and the color of the leaves that come from the strains.