What Is The Legal Position Of Kratom In Chicago?

Is Kratom Legal In Chicago?

The legal position of Kratom is different from state to state, and when it comes to Illinois, Kratom is legal there. Since Mitragyna Speciosa is allowed in Illinois, Kratom in Chicago is embraced too. However, some parts of Illinois ban Kratom, such as Alton, Edwardsville, and Jerseyville. Throughout the state, it is crucial to be over the age of 18 to possess and use Mitragyna.

All states are distinct when it comes to the legalities of Kratom. Some states are almost dormant, whereas others have too much activity and their paws are ever-changing, making it confusing for Kratom users. But currently, Mitragyna Speciosa is legal in the state of Illinois. The prominent cities in Illinois that embrace Kratom are Chicago, Naperville, Elgin, Rockford, and Peoria.

In 2014, a bill was proposed by the Illinois state legislature. This amended the Illinois Controlled Substances Act, and the bill allowed Kratom for anyone over the age of 18. Plus, it banned the selling of Kratom to underage minors. Even if adults were allowed to do anything with Kratom, it set a precedent for a bill that restricts Mitragyna throughout the state.

If this bill were accepted, it would categorize Mitragyna under Schedule I-drug Controlled Substances list. Moreover, the Kratom sellers would have to face a felony. However, this type of statewide ban is not applied yet. But we do know that some cities have restricted Kratom.

For instance, Jerseyville voted to ban the herb in 2017, and Alton city copied by banning it too in 2018. After the ban, the Alton police chief was interviewed. According to him, the ban was essential because Kratom was posing a threat to children.

But this statement is inaccurate because the 2014 amendment was already protecting children. The city wanted to restrict Kratom vendors who illegally sold Kratom to underage minors. But instead of only punishing that fraction of sellers, they exaggerated and punished the other conscientious Kratom customers.

In October 2017, the state rep. Katie Stuart, a Democrat, belonging to Edwardsville, proposed a bill to the state House of Representatives. This bill would ban Kratom statewide, and if anyone owned Kratom, it would be considered a class B misdemeanor.

Later in the year, this was referred to the rules committee, but the bill got rejected in the state Senate afterward. But this win did not last for long. In 2020, the surrounding Edwardsville proposed a Kratom ban as well. The American Kratom Association forced its members to share their Mitragyna testimonials with the city council.

Even with 200 positive Kratom testimonials, the city council still voted 6-0 to support the ban. This legal battle is persisting at the state level. On 6th February, lawmakers proposed the Kratom Consumer Protection Act, which legalizes the possession, purchasing, and selling of Kratom for adults. It also imposes rigid independent third-party lab tests to detect alkaloids and impurities. The results of the lab tests are featured on the packaging.

After two weeks, another lawmaker group came up with a bill that would ban Kratom statewide. Therefore, Kratom in Chicago is legal, but things could easily alter in the future. 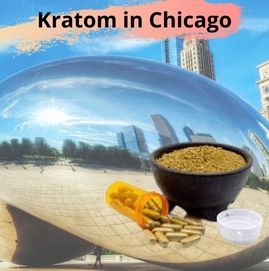 Purchasing And Shipping Kratom In Chicago

No matter what online vendor you choose, you will enjoy lots of perks of online shopping. Not only will your budget relax, but you will have lots of options to choose from. However, if you’re concerned about whether shipping Kratom poses any danger, you should shake off such worries.

This is because only the final destination is important when Kratom products are being delivered to your house. Therefore, if you live in Chicago, you’re free to buy Kratom products.

The Kratom Consumer Protection Act is a product by the American Kratom Association. This Act intends to professionally regulate the Kratom industry, guarantee the safety of the users, and hold Kratom vendors accountable for the items they are selling.

If states follow this Act, major problems that the Kratom industry is experiencing will disappear. If the Kratom market becomes regulated, it is better not only for the vendors and customers but for lawmakers too.

The Senate of Illinois has a pending bill for this Act. But they also have a bill that can ban Kratom statewide. Therefore, the probability of this happening is in their control. The American Kratom Association and Mitragyna enthusiasts hope that the state will follow the Kratom Consumer Protection Act. 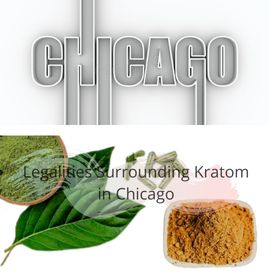 Many local Kratom stores in Chicago sell Mitragyna Speciosa, such as herbal shops, smoke shops, vape shops, and gas stations. Below are five such examples:

Working hours: The store is open Sunday to Monday, from 11 AM to 9 PM. From Tuesday to Saturday, their timings are 11 AM to 10 PM.

Is Kratom Famous in Chicago?

Definitely! Mitragyna Speciosa is available throughout Chicago in vape shops, specialty shops, and smoke shops. Moreover, whenever the state discusses banning the herb, many Kratom users have come forward to rebel and offer their help.

Is Kratom Classified in Chicago?

No, Kratom is not classified at the state level. A few parts of Illinois have restricted Kratom. However, Kratom is not categorized as a Controlled Substances list. But since some legislation is pending, it is crucial to keep an eye on the news.

Kratom is legal in the state of Illinois, but a few areas have banned it. Therefore, Kratom can be banned at the state level. But to counter this, the American Kratom Association has proposed the Kratom Consumer Protection Act.

Hopefully, the state will follow this Act, and the fear of Kratom being banned will be erased. This Act will regulate the Kratom market and boost its safety.

Ryan Jason
Previous Post Li Herbals Kratom Review- Is It A Reliable Brand? Next Post What Is The Legality Of Kratom In Hawaii?