Unfortunately, of the 196 countries in the world, only four countries have completely made this plant unambiguously illegal for human consumption under any circumstances. A few countries have not banned it completely, but have strict regulations governing it while most of the countries have made their availability legal to the people, due to its importance.

Australia: Though no incident of kratom abuse has ever taken place in this country, the country has banned the herb since 2003 due to the likelihood of its abuse. Australia does not ban the Mitragyna Speciosa tree or its alkaloid content in the country. However, the Committee has decided to place it under the Schedule 9 category in SUSPD, which means it is supposed to be a controlled substance in the country. This decision was taken since the country is aware that the leaves have not yet been abused in the country ever.

Burma (Myanmar): The officials of Myanmar, previously known as Burma, have completely banned the tree and hence it is unlawful to either plant, grow kratom plant or sell this herb anywhere in the country.

Canada: The users in this country are at luck. There are no restrictions on this herb throughout the country whatsoever. You can easily find the herb in the local stores over the counter and without any prescription. Moreover, you are allowed to grow, buy or sell the kratom herb and its supplementary products anywhere within the country.

Finland: Though not banned, the country requires you to possess a valid prescription to be able to buy or import the drug for consumption. Previously, many shipments have been seized when a few people tried to import it from other countries for their personal use. 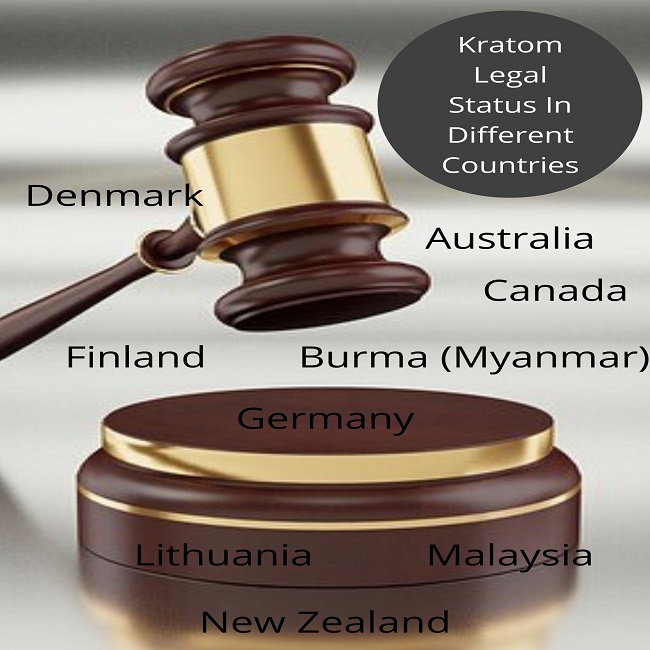 Germany: This country’s stand on this herb is a little vague. Way back in the past, people could freely import and export the herb without any legal hassles. Later, there were some legal issues associated with it, and it was considered to be a licensed drug. Now, however, the plant is considered as an unlicensed drug governed by the Section 73 of Medicines Act which means that an import of the drug on you, can put you in trouble at the border security check.

Israel: As per the regulations renewed in 2013, the herb is categorized as a controlled substance in Israel. Hence, its consumption and trade require you to possess a valid prescription or license. It is advisable to stay updated with the changing rules every year.

Lithuania: In this country, this herb is considered an absolute illegal substance. Hence one cannot risk to consume or trade this leaves or supplements in the country. If caught, it is a punishable criminal offense.

Malaysia–To sell this drug in Malaysia, it is inevitable to possess a license issued by the government for the same. In the absence of this license, it is illegal to either plant, grow, sell or perhaps consume this herb for any purpose.

New Zealand: As per the Medicines Amendment Regulations Act of 2009, Mitragyna Speciosa leaves, and its products are categorized under Schedule 1 as a prescription drug. Therefore, it is illegal to buy or sell kratom in this country, unless you have a valid medical prescription. Anyone found to be growing, selling or consuming this drug without a prescription is considered to be breaking the law and is accused of a punishable act.

Norway: This herb is categorized as a drug and is accessible only by recommendation from doctor or government officials.

Poland: At present, Poland considers Mitragyna and its by-products as a controlled substance. Hence possessing the license and prescription is inevitable here. The users have to be a little careful in this country due to its rigidity on this subject.

Romania: The recent rules as per 2010, categorize it as a completely illegal substance. So obviously, it is prohibited to sell, buy, grow or even consume this drug anywhere in the country. Otherwise, it is considered as a punishable act.

Russia: The rules of this country are not clearly understood, and hence this is a controversial topic. Some sources claim that the country considers kratom to be legal, whereas some others say that the herb is prohibited after 2011. So it is best to consult a government official and gather all the information about its current legal status before consuming the drug in this country.

South Korea: This country has completely illegalized this herb for domestic or medical purposes. Hence one can face a fine or punishment for breaking the law by importing or exporting the drug into or from this country respectively.

Thailand: As we know that the Mitragyna tree has originated from Thailand. The ancestors of this country have been consuming its leaves for centuries because of its medicinal properties. Moreover, it has other traditional uses such as being used in the form of tea or coffee. However, it is shocking that the country has still categorized it as a level 5 Narcotic, making it illegal to buy or sell this herb. It is interesting to know that the “Thai Kratom” available online with many vendors, is in fact from Indonesia and other countries in Southeast Asia. The research suggests that the country makes most of its economic gains with the opium trade and hence have illegalized kratom.

United Kingdom: This country is quite lenient in terms of its legality of kratom. One is free to sell. Buy, import, export, grow and consume this herb anywhere within the country without any legal issues. The officials have neither declared it as a restricted nor as an illegal substance. However, the capsules or powder sold here are a little more expensive as compared to those available in some other countries.

Indonesia: This country happens to be a leading producer and exporter of Mitragyna products. So it is evident that the country has no issues with this herb and it allows the consumption, growth, and trade of the herb without any prohibitions. Some of the well-known strains of kratom are a native of this country. Most of the strains have their roots in Southeast Asian countries.

Austria: As per the current laws, this plant is completely legal in this country, and there are no restrictions on its trade or consumption for either traditional or medicinal use. However, it is best to keep checking for the updates on the changes in laws.

Belgium: One does not need any prescription to buy the herb in this country. It is categorized as a completely legal drug and hence is available easily at the local vendors.

Greece: This country also completely supports the use of the herb and hence has no restrictions associated with its use anywhere within the country. It is freely available to use without any prescription.

Brazil: People have been enjoying this herb without any hesitation in this country since it is regarded as an absolute legal drug here. Trade and consumption have no legal obligations here.

Hungary: Though it is legal to trade in kratom supplement in the form of incense, it is illegal to consume it in any other form. Hungary does not allow human consumption of this herb, and hence there is no question of selling or growing the tree within the country.

Ireland: Previously, it was completely legal to trade, grow and consume this drug without any rules and regulations. However, recently, the government has declared this herb as an illegal substance and its use an offense with a penalty of fine or punishment. It is a controlled substance under the Misuse Of Drugs act since 2011.

Italy: There is insufficient proof supporting the current legal status of this herb in the country. However, some if the Italian users claim that the herb is completely legal in their country and has no legal issues associated with its consumption. But again, it will be best to consult an official for the legit legal status of this substance.

Netherlands: This country is a leading supplier of kratom and its supplements in entire Europe. It is completely legal to trade and consume it within the country. One can easily find these products at online Dutch vendors and locally in “Smart Shops.” Hence, it won’t be wrong to say that the users residing in this country are at a great advantage.

USA: Though the herb is legal in most of the states in the country, the rules tend to vary a little from state to state. So it is very important to consider the laws of every state separately before considering to bring in the herb in that particular state. Some states require you to possess a valid license and prescription.

So in a nutshell, the following is the summary of the legal status of this herb in the major areas around the globe:

The countries where the drug is prohibited are:

In other countries, this herb is categorized as a Schedule 1 drug and has harsh regulations governing it. These countries are as follows:

Which kratom is best for the treatment of chronic pain?

i suggest you red vein kratom due to its best result.

is use of kratom legal at federal level?

yes!the legality of kratom is at federal level and in the most states.

it is good news for you kratom is legal in Florida, except in Sarasota County.

Which type of Kratom can I get easily?