What Is The Legal Position Of Kratom In New York City?

Yes. Since Kratom in New York is not yet regulated on a federal level, it’s legal in the city.

The earliest bill was introduced in 2017 in the state assembly. This bill attempted to restrict the selling of Kratom to underage minors. This same bill was proposed to the state Senate after a few months. However, the committee rejected both bills due to the signed petitions and support from the American Kratom Association.

Fast forward to 2019; the state senator, Pamela Helming, proposed a bill that was a variant of the Kratom Consumer Protection Act. The bill’s intention would make it legal to own, sell, and consume Kratom as long as the user is over the age of 18. And if any seller sold Kratom to an underage, they will have to pay a fine of $500.

Plus, in 2017, another bill titled A00231 tried to ban Kratom completely. But it also died in the committee. Previously, Mitragyna Speciosa was unmonitored. It was only known as an ancient herb which means the FDA did not regulate it. The opponents of this industry want Kratom to be banned in New York City.

On the other hand, the Kratom supporters wish to see this industry regulated shields customers and keep Mitragyna inaccessible to underage minors. The latter is a bill known as the Kratom Consumer Protection Act. 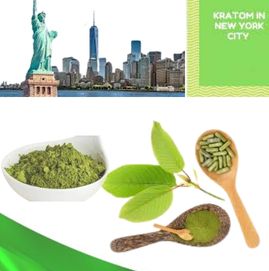 How Is Kratom Purchased And Shipped In New York City?

Many people have the same concern about buying Kratom products from online sellers and then delivering them to their doorstep. However, Kratom is legalized in New York City, and where the shipping is concerned, only the final destination matters.

Even if your order travels through the states that have restricted Kratom, the package will still appear in your home without any issue. The shipping companies have to obey laws, and no laws are restricting Kratom in this city.

Therefore, no Kratom user living in New York City should be worried. It’s best to buy Mitragyna products online and have them shipped to your home. It is a cost-effective solution, and online sellers have extensive product lines.

The American Kratom Association (AKA)

The American Kratom Association is the biggest Mitragyna advocacy group in the United States. It was introduced in 2014, and its mission statement is to protect the rights of Kratom consumers throughout the 50 states. The Kratom Consumer Protection Act can achieve this.

The American Kratom Association has lobbyists throughout the country urging the states to adopt the Kratom Consumer Protection Act. The Act has already been passed in Utah, Georgia, Nevada, and Arizona. A few other states have the Act up for a vote. New York City is one of those states.

The AKA has also introduced GMP protocols. These protocols are not compulsory but only a crucial aspect of routine procedure. The regulations of GMP protocols strive to make the Kratom industry a safe place.

What is the Kratom Consumer Protection Act?

The Kratom Consumer Protection Act was introduced by the American Kratom Association (AKA) and the Botanical Education Alliance (BEA). This revolutionary Act will solve the following concerns:

The Kratom Consumer Protection Act will not only regulate the industry but also make it a safer place. As for now, New York City has a bill to follow this Act.

If you reside in New York City, you will be happy to know that Kratom sales usually occur at bodegas. Alternatively, you can get Kratom products from herbal shops, smoke shops, and gas stations.

If you prefer to purchase from a local store, you should visit the below options:

Working hours: You can visit them all week from 8 AM to 11 PM

This is a great Kratom specialty shop if you are eager to get your hands on top-notch Kratom Strains. They offer extracts, Green Vein Maeng Da, CBD oil, Red Bali, white vein Maeng Da, and many more.

East Village Smoke Shop is recognized for its competitive prices and excellent vape juice. Their staff members are skilled and friendly. You can find all your preferences here.

Working hours: From Friday to Saturday, they are available from 7 AM to 4 PM

From Sunday to Thursday, they are open from 7 AM to 2 PM

This store provides hookah, vape gear, CBD, and a lot more. Their staff is knowledgeable, and they assist all customers with great care.

Working hours: They are open all week from 8 AM to 7 PM

If you do a quick search for online vendors that offer Kratom in New York City, you will be flooded with tons of options because this herb is very sought-after. You should select a vendor by following all precautionary measures. Observe how their quality, packaging, and suppliers are.

People prefer online vendors over physical shops as they can enjoy many perks. For instance, the standards and pricing of online sellers are very reasonable. Since most online sellers source their products from suppliers in bulk from Southeast Asia, they do not pay the distributor or the middle man.

Local sellers are responsible for paying the storage, utilities, and rent which is their items are priced higher. Comparatively, online sellers have it easy as they don’t have to pay for these things, so their pricing structure is lower. Plus, with fewer expenses, they can prioritize their quality and maintain their reputation properly.

But if any seller cannot meet the required standards, customers are very quick to reveal the brand’s inferior quality at different forums. From there, the word spreads quickly.

Whether you prioritize quality or reasonable prices, you are better off buying from online stores. Plus, they know how to satisfy their clientele. Even if you want a rare Kratom strain, you will find it online.

How Is Kratom Classified In New York City?

Currently, Mitragyna Speciosa is not classified under the Controlled Substances list. Even though the state is planning to regulate the industry, it is possible that new bills can arrive at any time. This is why all Kratom admirers have to be updated on the Kratom laws in their respective states.

Moreover, Kratom fans should support the industry when required because their testimonials have a valuable effect on keeping Kratom accessible. The states that have banned and classified Kratom put it under harmful drugs like marijuana or heroin.

Is Kratom In New York City Famous Or Not?

Whenever the Kratom industry needed support in New York City, lots of enthusiasts came forward. This is a huge sign that Kratom is cherished in the state of New York City.

Is Kratom’s Legal Position Under Threat?

Currently, Mitragyna Speciosa is being managed at only the state level. Kratom is not being banned anywhere at the federal level.

Therefore, it is important to be informed about the state laws and offer help whenever needed. In New York City, the market is going strong as they are attempting to regulate the industry.

There is no chance that Mitragyna Speciosa will be banned in New York City. The lawmakers are trying to follow the KCPA, which will monitor the industry. If this Act is accepted, it will solve all the current problems experienced by the Kratom industry.

For instance, labeling, age restrictions, contamination, and more. Therefore, there is no indication that Kratom will be banned in the city. It will likely be regulated instead.