What Are the Health Benefits of Kratom?

Kratom is one of a growing number of Southeast Asian herbs that are becoming popular for the treatment of various ailments. The World Wide Web has brought this herb to more Western consumers. Here is a complete review of the health benefits, legality and scientific studies on Mitragyna speciosa.

What is Mitragyna Speciosa?

The tropical, evergreen tree is of the Mitragyna speciosa genus and Rubiaceae family (Rubiaceae includes coffee trees). Kratom (also spelled as or kratum) has broad leaves with green, red or white veins. Its leaves are ingested, chewed, smoked, brewed, ground up into powder or concentrated into capsules.

Where is this Herb Grown?

There are at least 20 active compounds in kratom. Some of the more recognized ingredients include 7-hydroxymitragynine, mitragynine, paynantheine, speciocilatine, and speciogynine. 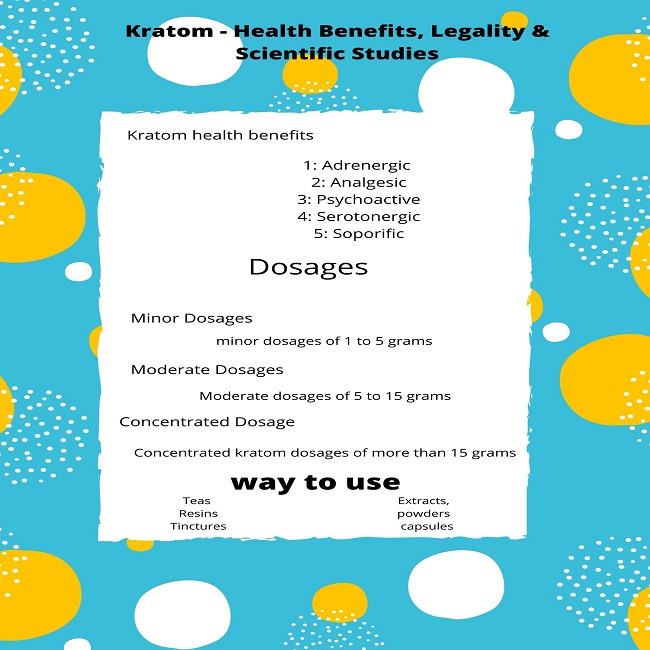 Mitragyna users enjoy physical and emotional health benefits, although none of these have scientifically proven. As Mitragyna dosage levels increase, the effects enter new dimensions. Gender, weight, and genetics will impact users experiences. Kratom has numerous pharmacological properties, including the following:

When minor dosages of 1 to 5 grams are used in tea or cough syrup, benefits could include improved alertness and calmness. Consumers use the herb for fatigue, anxiety, depression and weight loss. Others claim that their cognitive abilities are improved after taking Mitragyna.

Moderate dosages of 5 to 15 grams can generate euphoria. Some prefer to self-medicate using kratom as a pain reliever or painkiller. This herb is also used for those who have ADHD or problems sleeping.

Concentrated kratom dosages of more than 15 grams can lead to sedation, stupor, and grogginess. It might be an aphrodisiac. These mind-altering effects are more likely to occur when Mitragyna is more concentrated or mixed with other drugs.

Mitragyna speciosa is officially illegal in Australia, Thailand, Myanmar, and Malaysia. Although the State of Indiana has banned Mitragyna formally, the drug is still legal in the rest of the United States. The United States Food & Drug Administration (FDA) has called Mitragyna a “drug of concern.”

So far, there have been very few active, comprehensive studies on the health, medical or scientific benefits of kratom. In the 1960s, GlaxoSmithKline considered adding Mitragyna to its roster of products but did not follow up. In February 2012, the United States National Library of Medicine’s PubMed Database listed 35 published articles on Mitragyna speciosa.

As of December 2010, the United States Drug Enforcement Agency (DEA) stated – “there is no legitimate medical use for kratom in the U.S.”

One key problem is that in the primary areas where the herb is grown, it is officially illegal. As online kratom sales increase, scientists are starting to pay closer attention.

University of Massachusetts Professor Edward Boyer and University of Mississippi Researcher Chris McCurdy discussed the herb for a Scientific American article entitled “Should Kratom Use Be Legal?”

In the Journal of the American Osteopathic Association December 2012, Vol. 112, pages 792 – 799, “Pharmacology of Kratom: An Emerging Botanical Agent With Stimulant, Analgesic and Opioid-Like Effects,” Prozialeck, Jivan and Andurkar looked into how the Mitragyna speciosa chemical compounds acted upon the body.

The scientists concluded that Mitragyna had both in vivo and in vitro pharmacological effects.

Mitragyna speciosa’s adrenergic capacity helped people stay alert and attentive. It worked with serotonin receptors to improve sleep. Kratom’s compound binds with the mu-opioid receptor to deliver the same euphoria as opiates. The scientists could not determine whether it was addictive.

It should not use if you plan on driving or operating heavy machinery. Because the side effects have not completely documented medically, women who might become pregnant, are nursing or pregnant should avoid kratom. Experts are not certain of how kratom reacts with other drugs.

The Kratum Act 2486 of August 3, 1943, banned the planting of a new tree. The interesting thing about this ban (which remains in effect) was that 1. it was made during World War II and 2. it was made while the government was taxing opium. Thus, if opium was legal, why was kratom banned?

Kratom might have banned because it was being used as an alternative to the Thai government opium monopoly. Thai House of Representative Member Police Major General Pin Amornwisaisoradej stated the following:

“Taxes for opium are high while kratom is currently not being taxed. With the increase of those taxes, people are starting to use kratom instead and this has had a visible impact on our government’s income.”

Kratom is being self-administered for opioid withdrawal. Thailand may remove the ban to use the herb for “drug treatment programs.”