A few kratom strains tend to be moderate in their effects, i.e., a perfect intermingling of both the painkilling and energetic effects, giving out an ideal synergistic outcome.

The major characteristic that differentiates moderate strains from the slow and fast strains is that as opposed to the other two, these tend to have a rather reasonable influence on the way you perceive things. It is not a drastic KABLAM consequence on the mind but is more like a blissful transition in your emotions.

This is an appropriate choice of kratom for people that seek for an intermediate between the feeling of energy and experiencing euphoria. This type leaves one with a sense of happiness and relaxation feeling of being worn-out or drained of energy. Although it lets the user feel relaxed rapidly, it won’t let them go through the sudden rush of power, which is otherwise the case with some of the fast strains. People suffering from severe cases of anxiety, in fact, prefer the moderate over the fast strains for the sake of its long-lasting effectiveness. Consuming this type might help in reversing some undesirable sentiments like fear or depression and in turn, induce an optimistic point of view and makes it reasonable to understand why things are the way they are.

Green vein strains are generally the moderate strains, and this includes: 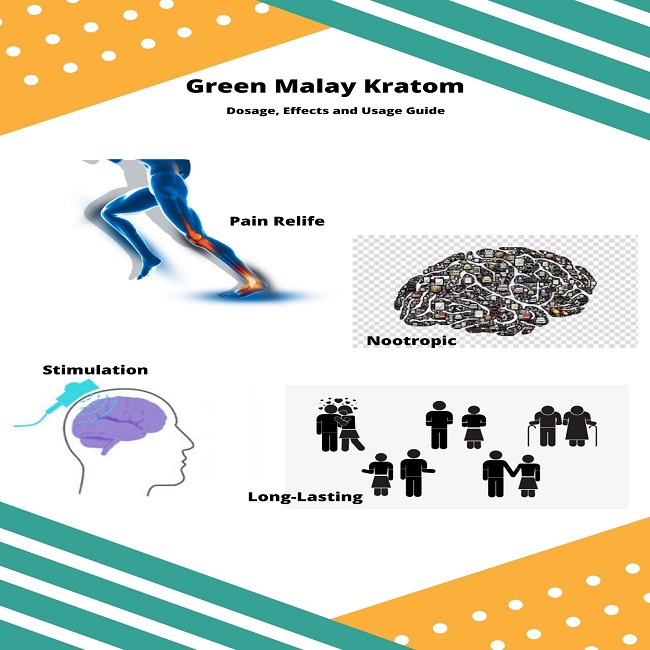 However, Borneo and Indo kratom are more on the sedating end of the spectrum and hence are in a different category altogether.

After being graded as “Super” and “Premium” grades, Green Malay Kratom gained its popularity amongst the users. This kind is typically found in a green vein variety and is known for its characteristics longest-lasting effect imparted by the leaf cell-wall density. Another vital point being, that this strain can be ‘topped up’ in small quantities when the results begin to subside.

While it is an intensely euphoric and moderately energizing kratom at lower amounts, it develops into a soothing and amusingly sedative at higher quantities. The transition phase, from energizing to relaxing, hits every user at a different point. Therefore, one must conduct trial and error experiments with the dosage to figure out what suits them the best.

The most talked about the effect of this strain is its distinctive nootropic effects, which, in spite of substantial stimulation, can intensify the attention span and tolerance for quite long periods. Fascinatingly, these effects are generally observed only in retrospect because of its smooth character of effects.

As already mentioned, there are a few strange effects that seem fairly unique to this kind, which makes it gain its popularity. Some of these effects include:

The Most Effective Cbd Products From Hollywood-backed Brands

Install or Update Multiple Apps at Once

Users are advised look for alternatives for this software or be extremely careful when installing and using this software. Usually…

Rent One Of The Best Essay Writing Service Within The Uk

In her first ever online video essays ? on Lynch?s Wild at Heart ? she shakes up the videographic universe…

The manufacturer has backed the product with a guarantee and wants to see customers pleased with the experience. That should convince anyone to give Green Malay Strains a try for themselves.

Always check the details on the packaging before placing an order for Green Malay Strains. The weight of the package is printed on the front and people take notice in good time as well.

Green Malay Strains have been reviewed by other users and people want to give it a try.

People are convinced that the good reviews reflect high quality compounds that people simply want to try for themselves.

Kratom has been traditionally used as a drink in many indigenous cultures found in the world. Malaysia was a popular place where locals would drink Kratom tea according to their own special customs.

True fans of Kratom will immediately be interested in Green Malay Strains now on the market. There are good reasons to give the new strain a try when the opportunity arises.

They can recommend some important sales points and give people a new choice that they want to make.

The product is sure to be a big seller for those who want to try Green Malay Strains. It is definitely unique and represents a big step forward on the consumer marketplace.

That could sway the decisions that they make if they opt to purchase Green Malay Strains too.

Green Malay Strains are sold in their own unique packaging that people want to use in time. Find these in stock and waiting to be sold to willing buyers that want to know more about the product.