Constipation refers to a reduced frequency of the urge to pass stool occasioned by hardening stool. It has several causes ranging from low fiber intake to reduced water intake. Kratom, like any other drug, has few adverse effects, constipation is one of them.

There are different theories as to how kratom causes constipation. One of the theories advanced has it that kratom activates the sympathetic part of the nervous system. Sympathetic nervous system operating through a series of interconnected neurons inhibits the activities of the digestive system. It would mean inhibition of peristalsis too. This definitely will interfere with stool formation causing constipation.

Kratom induced constipation, as indicated above, is a reduced frequency of the urge to relieve stool occasioned by frequent use of Kratom. Possibly Kratom causes through different mechanisms the reduction in frequency and Harding is a stool. 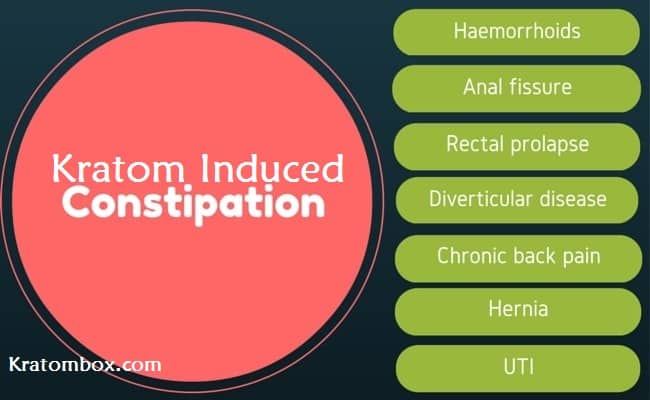 What shall I do when I develop constipation after taking Kratom?

It is not surprising to experience a natural resolution to a kratom induced constipation. So when kratom users develop constipation, the first thing would be to observe it for a while to see if it resolves naturally. If it fails, then users can move to the second stage. Here, they can either reduce the dosage of Kratom they take or change the strain of Kratom to use. They have proven very effective in managing some cases of Kratom induced constipation. If this fails, they may stop the drug altogether.

Also, they can increase fiber intake, drink a lot of water and adopt a balanced diet with all the essential nutrients. This also has proven very effective. In some cases, laxatives and lubricants may also used.

Is Kratom harmful during constipation?

It may be or maybe not. It depends on the extent to which kratom interferes with the bowel movements of its users. Whereas in some a mere reduction in the dosage is safe enough, in others even the discontinuation of the drug may not help.

So this could be dictated by a lot of factors. It can be seen that constipation in a kratom user, as much as it is caused by kratom, can be advanced by other factors such as excessive fiber intake, reduced water intake among others. A user could be blaming it on Kratom, yet it’s because of the associated factors.

So in answering the question, kratom can be or cannot be harmful during constipation. But because it causes constipation, it’s advisable to manage your constipation before embarking on taking dosages of Kratom

How frequently can I take Kratom in constipation?

Like we have already indicated, constipation can be as a result of taking too much kratom. To help users alleviate the symptoms, they can reduce the dosage of Kratom they take. In some cases this may not work, under such circumstances, users may be advised to stop taking the drug altogether.

Kratom has few side effects that are said to be pronounced when taken with food. As such, diet modification is necessary when taking kratom. Yet still, some people use Kratom comfortably with food. Kratom has been shown to suppress the appetite.

Taking kratom on an empty stomach is highly recommended. However, when its users find it difficult to starve themselves, they may take controlled sugar and calories so as not to suffer serious side effects of Kratom.

Kratom has linked to constipation, and therefore it would be wise to for kratom users to control their fiber intake, otherwise, they will be worsening constipation.

Madison Iva
Madison Iva is kratom expert and using kratom from last 5 years, she know best strains for different effects. Learn the insights about kratom. She love cooking and playing tennis.
Previous Post How to Take Kratom with different ways Next Post How Does Kratom Work In Body?

Does Kratom give the user constipation? I haven’t had such experience… Would you mind to tell me how are you so sure?

This can be more intense for those who use it regularly hence it is advised to minimize usage if these side-effects become intense.

How does Kratom induce constipation?

Kratom activates the body’s sympathetic system whose function is to reduce the gut’s peristaltic activity. Therefore, this suppresses the formation as well as egestion of stools.

How should one deal with Kratom-induced constipation?

The first thing that one should do is to reduce the dosage of Kratom they take or even change the Kratom strains that they buy. However, if severe, it is preferred to stop it altogether.

Is Kratom a safe herb?

I once took Kratom on an empty stomach and had a rough day.

That is true. For those who take Kratom early in the morning more so on an empty stomach, the effect is more pronounced

My best friend takes Kratom about 4 times in a day to help him manage his Fibromyaglia. He says this brings bowel movements very easily for him.

Kratom does have some fascinating effects especially with those who take it alongside something such as Metamucil. This helps give the bowel movements a boost.

How should one take it with Metamucil?

Metamucil is bought over the counter. After taking Kratom, chase it down with Metamucil shortly afterward. This has some good effect on the user

What are some of the strategies used by people to alleviate this problem?

Some users take Miralax which is usually recommended by doctors to prevent or alleviate constipation.